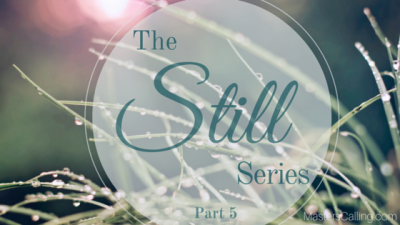 Hi friends! How has your week been? Praying you have felt the peace of His presence.

Today we’re diving in straight to the scene – come join me in the Gospel of John!

Now a certain man was sick, named Lazarus, of Bethany, the town of Mary and her sister Martha. (It was that Mary which anointed the Lord with ointment, and wiped his feet with her hair, whose brother Lazarus was sick.) [John 11:1-2]

Then Martha, as soon as she heard that Jesus was coming, went and met him: but Mary sat still in the house. [v.20]

Both experienced loss, yet their responses are radically different. One sister exits in haste, the other stays put; sitting still in her house.  At first glance, it might appear as if Mary had no regard for the desperate situation.

However this is the Mary we find in scripture “who also sat at Jesus feet and heard his word” [Luke 10:39]. Perhaps Mary is still in her home, so her heart could enter prayer, as she waited upon His presence. Because when the Master called – Mary immediately came.

Martha’s approach was a bit different than Mary; a bit hastier. Yet we can’t weigh their words against each other – they said the exact same thing! “Lord, if You had been here, my brother would not have died. [v.21, 32]

However, Christ’s reaction is remarkably different. I am not typically competitive and cringe when I sense it in others and myself – but for sake of contrasting Christ’s response, let’s consider the two conversations and their approach.

How often do I misinterpret what others say, because I am not still enough to hear. Martha was talking at Jesus and to Jesus, but was she talking with Jesus?

Unable to discern the personal relevance of His words, she assumed Jesus meant; Lazarus would be raised “at the last day”. She didn’t hear Christ’s personal message – He was moments away from performing a miracle, one that would personally effect her! Clearly, Martha was a faithful follower. She believed in God’s power, but missed the personal Word of His presence.

It’s the intentional pauses of sitting still, seeking His Word,
which takes relationship with God to a whole new level.
It changes our connection with Christ
from communication – to sacred communion.

“Then, when Mary came where Jesus was, and saw Him, she fell down at His feet, saying to Him, “Lord, if You had been here, my brother would not have died.” [v. 32]

Mary fell down at His feet; broken, begging, pleading, beseeching. Mary’s petition is not the first of holy laments in scripture. In bearing her soul and sharing her sorrow – the Savior hears her cry. “A broken and contrite heart you, God, will not despise.” [Psalm 51:17]

Therefore, when Jesus saw her weeping, and the Jews who came with her weeping, He groaned in the spirit and was troubled. And He said, “Where have you laid him?” They said to Him, “Lord, come and see.”  Jesus wept.   [v.33-35]

Mary knew where to cast her cares, where to lay them, put them and release them. Jesus was moved by Mary’s expression of sorrow. Then asking where Lazarus lay, He wept.

For when Jesus called Mary to His presence, she rose swiftly.  Although, full of grief, Mary’s heart sat still in the center of an emotional storm. Personal relationship is how we are able to sit still, refusing panic; even when the pain is deep and the pressure lays heavy.

Intimacy with God is how we abide in peace
instead of anxiously rushing in panic.

I appreciate Mary’s example of sitting still in the house. Because when everyone is running frantic, fear stricken and shaken; we can press into prayer and receive the overwhelming peace of His presence. Mary waited silently…

“My soul, wait silently for God alone, for my expectation is from Him.” [Psalm 62:5]

I don’t want to run to Jesus, to talk at him – I want to run to converse and commune with Him.  So that.. I can clearly and correctly hear, when His Word speaks personally to me. Martha saw the big picture, but missed His personal message.

The more secure we are to simply sit quietly still, the more we can discern His Word speaking intimately to us. God’s Word proclaims power and promise. And it’s personally penned – to us and for us. Intimacy with God is always the answer to living truly still.

Next week, we will seek and study how; relationship with Christ, shapes our service to Him. Interested in sharing one or two things you have been encouraged, challenged or comforted from The Still Series? Your feedback is a blessing! Come by this page and leave me a message with your thoughts (it remains private). Automatically, you will be entered to win a special gift I have created just for you!